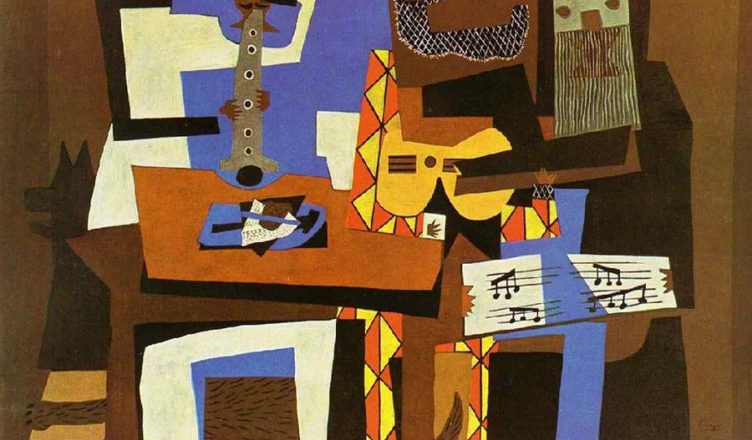 This painting by the renowned artist Picasso in the year 1921 demands an understanding of the Cubist style of art. Cubism, the most influential art movement of the 20th century was pioneered by Georges Braque and Pablo Picasso. Cubist artworks are made by analyzing the objects, breaking them up and reassembling them in abstracted geometric shapes and interlocking planes representing a multitude of view-points. A point to be noted is that, music always remained the favourite theme of the cubist artists.

“Three musicians” is a Synthetic cubist art, which basically became prominent during the later phase of cubism. Synthetic cubism is marked by simpler shapes and brighter colors. Synthetic cubism developed from analytical cubism when the artists started including patterns and textures in their artworks along with their experimenting with collages made from paper cut outs. As Synthetic cubist style delved deeper into the artworks, the images became flatter giving up all its references to three-dimensional space.

Coming to the concerned painting, on close observation the following objects can be noticed – a Harlequin, a Pierrot, a monk, a barely visible dog. The masked Pierrot plays the clarinet, the monk sings and holds some music sheets, and right at the center the Harlequin strums a guitar. A striking feature is the overlapping of the shapes which gets complex right at the center of the painting connecting the three musicians.

It is believed that the three musicians in the painting represents the poet and criticGuillaume Apollinaire (Pierrot), the poet Max Jacob (the monk), and Picasso himself as the harlequin.Both of them had been close to Picasso before Apollinaire died of Spanish flu and Jacob took the decision of entering monastery.

Like the musicians – “You are allowed to be both a masterpiece and a work in progress, simultaneously.” – Sophia Bush