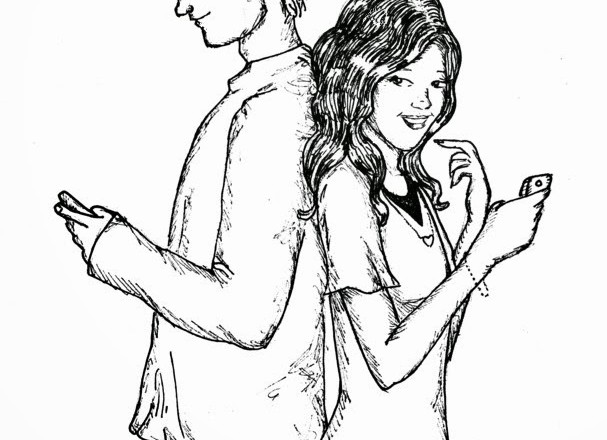 ” A perfect date must be in accord with alcohol. The blurred vision, the innate blithe that is incurred in the process, with sheer artfulness shoots out the tiniest possibility of sober, fault finding behavior – the most common reason for first dates getting converted to last ones.” ~ the blogger.

A vibrating cell phone for an anxious engineering student, or rather any anxious student can never go unnoticed. Metaphorically, a vibrating cell, for a student with ample time – for no reason, does at some levels imply similar status as light at the end of a tunnel, a magical parachute for a free falling person and in some cases help you carve out an entire story with family and kids, even from an unseen text. And that is the very reason, I loathe writing. I can reach the pinnacle of deviation from a topic with the slightest bit of effort.

Anyways, I reach out to my cell which had vibrated like 5 minutes back, the above thoughts being similar reasons for the delayed realization and find a text from Akanksha. Now, she always has this habit of sending texts in the weirdest manner possible and most often making me rethink instances that I may have missed apologizing recently or if it is 12 o clock already. But, I must say this has added a lot to my way of not always letting my intentions clear in the words that I speak with anyone. ” I know you have a very bad taste when it comes to dressing sense and fashion, but since you are the Placement Coordinator, you have been given an extra life and now tell me if it is a blue or a black coat that you will prefer for an interview candidate to be wearing. ”  I  literally read that text from her twice before I could figure out that she had some interview the next day for a job, amidst digesting facts that it had been just 4 months since she started with her Masters in Law. With a few exchange of texts, the news was clear that she had an interview with the EIH Limited, the next day and yes of course, the most intriguing fact is that the thing that concerns her is the blue or black coat and her numerous pair of shoes which she out of no where unfolds a sudden taste of hatred for. Typical Akanksha, yes she is, but the time, being amidst my mid semester exams, I opted for my silent admiration. Amidst, the chaos of her dress and shoe selection, I could manage to ask if her resume is ready and taken a print of, only to find out that she had never prepared a resume nor has any clue of what to be included. But, of-course, how can that lessen any idea coming from her side and specifically, when the idea is of drawing and coloring flowers on the left and right margin of the resume, you just cannot deny offering a helping hand to the poor girl. So, I offered sending my resume as a prototype for her to edit her stuff in. That is easier said than done, especially when you just cannot hand it over by hand or post, because apparently for her, we stay in a world with internet only to be able to chat and well send pictures, yes who would not know it better than her.  After a l0-ot of assistance, we could finally get her ready for the big interview.

It was 6 in the evening and still there was no text from her. My whatsapp could only manage to show me step by step guide to receiving, editing and printing a document that you receive over mail, from yesterday and well a Good Luck sent in the morning. And I suppose, a typical fellow with lack of inspiration or who tries to find inspiration in everything that he comes across, would try picturing him on top of some snow-caped mountain holding some sort of flag and yes that comes from or rather ‘even’ comes from the ability to open and edit attachments over mail. Well, in my defense, and here am trying to speak for every next fellow, she was technologically challenged. No it does not do any good. Anyways, I get a call from her at around 9 in the night and before I could even ask her about the interview, she brisked in “Sid, I need your help. There is a huge problem”. Well, naturally at such a moment, its either she requires extra photos or some certificates that she may have missed carrying along. But NO, not for her, these are too mainstream issues. So instead, she decides to drop her cell phone from the second floor of the interview building, smashing on to the marbled floor. And of course, the only word I was searching amidst this discussion was ‘Anyways’, well how was your interview for god sake? “Oh I got through it, my father is presently inquiring about the job description and other facilities with them.” I was mentioning mainstream a little while ago is it, now that is more like it for her.

For an adventure loving person like me, you can never get bored of such an eventful turn of events. So what if you have to wait for 12 hours or even picture yourself atop the Mt. Everest for a change, pays off, it does and in the weirdest way. No wonder she wanted to be an event planner and be among planners. I must say, damn it is required. Its weird, for a person like me, who would do anything to predict the turn of events and be in the comfort zone, to be with someone who would go to her workplace and in the evening be accompanied with cops, well, just for a change. And to be writing a memoir, that is so not me. This girl has changed me beyond bounds and little did we know that things would never be the same after the above interview. Amidst trying my best to reconcile whatever we had, memories do drop down of the night, the night indolence over powered a party of some sort and which didn’t at all take time to crack open an 8 year long admiration into words and tears.