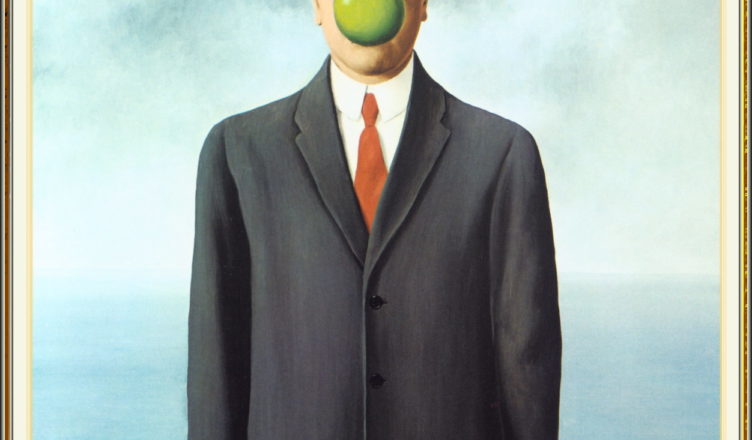 A storyteller isn’t always required to use lots of words to make a complete story. A single line can convey a deep message and can possibly leave you with a wide range of interpretations. Such can be said about Rene Margritte’s works which are collection of normal objects organized in a way to give rise to surreal contextual situations. This is quite different from other surrealist artists who mixed dreamlike images with abstract shapes.

“The Son of Man” is essentially a self-portrait by the Belgian painter.

On careful observation, one can find the following objects in the painting –

A man wearing an overcoat and a bowler hat, behind the man a low-level wall beyond which a sea can be seen topped by a cloudy sky, a green apple hovering in the mid-air ensconces a larger portion of the man face, a very small portion of the eye can be seen peeking over the edge of the green apple. A striking yet confusing feature is the elbow of the left arm which is bent backwards. Why is that the bottom button unbuttoned and the top one buttoned!

According to Margritte, the painting depicts a subtle nature of humanity. “My painting is visible images which conceal nothing; they evoke mystery and, indeed, when one sees one of my pictures, one asks oneself this simple question ‘What does that mean?’ It does not mean anything, because mystery means nothing either, it is unknowable.”

Thus, the painting speaks about the general human interest to know the unknown, the hidden. A veil, a mask, or even an object that hides something grabs the prime attention of the observer which ultimately blurs the entire surrounding of the mask. The observer’s mind tends to battle the conflict between the visible that is unhidden and the visible that is hidden.

The painting is detailed with a number of elements for example the blue water which is a typical symbolism for subconscious which in turn is a significant element of surrealism. In spite of innumerable details we find our vision and thoughis stuck at the apple and everything hidden by the same. That’s the power of this painting of 1964. The onlookers are left in a state of curiosity, conflict, struggle etc.

On a different note, some artists believe that “The son of Man” might have some religious connection with reference to the Christian faith where “Son of Man” refers to Jesus. Thus, the painting might as well be viewed as a surrealist portrayal of Jesus’s transfiguration.

Nevertheless, ‘The Son of Man’ gains the status of being one of the most parodied artwork!