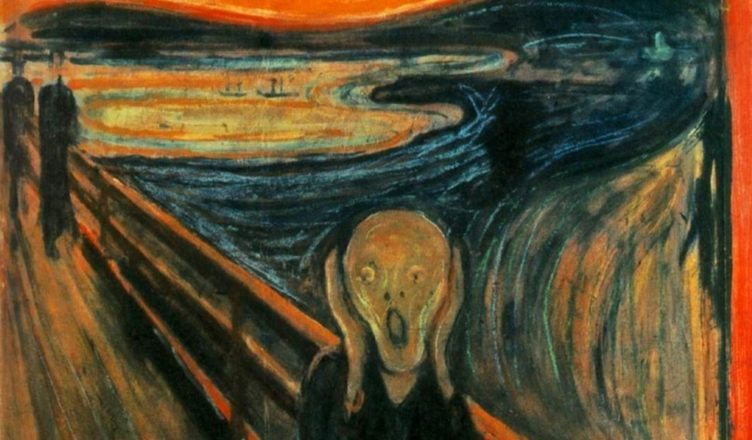 Expressionism saw the light of the day quite concurrently across various cities of Germany. The growing detachment of humanity with the world around, the deprived sense of authenticity and spirituality gave fuel to the emergence of Expressionist movement. Its partial reason of emergence can also be attributed to being a rise against the prevalent Impressionism and academic art.

The key features that identify its uniqueness are – distorted forms, luxated spaces, strong use of colors, agitated brushstrokes, exaggerated emotions of various forms of anxiety and yearnings.

Thus, the emergence of expressionism promoted the idea of the art to a reflection of the artist’s mind, his feelings rather than being a replica of the nature’s appearance. Thus, to sum up, the expressionist artists through their artworks conveyed their distended mental state which was a result of the agitations and worries imposed on the modern world (late 19th century and 20th century).

Now that you are aware of expressionism, this particular painting would make some sense to you.

What do you see? A genderless person standing or slightly leaning across a railing. Bloody read sky with some about of orange, blue-black background. Behind the screaming figure, two other figures are seen turning their back. Far behind, quite faded in the red-blue imagery is the image of a city.

As per Edvard Munch’s own words, this painting derived inspiration from one of his memories. His memory is about a time at sunset when he was having a walk with two of his friends. At a point he felt too tired to walk further which made him eventually lean against the railing. His anxiousness made him experience a scream from within and that seemed to be reflected from the surrounding piece of nature.

‘The Scream’ exhibits an anxiety, concern, angst towards the world.

Well, there are endless number of interpretations. On such is of Sue Prideaux which connects the painting with suicide. The reasons behind this interpretation are – the mental state of Munch at that time, his fear of developing the mental illness that had already taken his sister, and the depicted bridge was believed to be a chosen spot of the jumpers.

This work of the Norwegian painter paved the way for the Expressionist Movement of the 20th century and along with Vincent van Goghand James Ensor became the major influence to what followed in the field of Expressionism. But, what really makes this painting to popular even today is the very fact that you can’t just feel nothing when you look at ‘The Scream’.