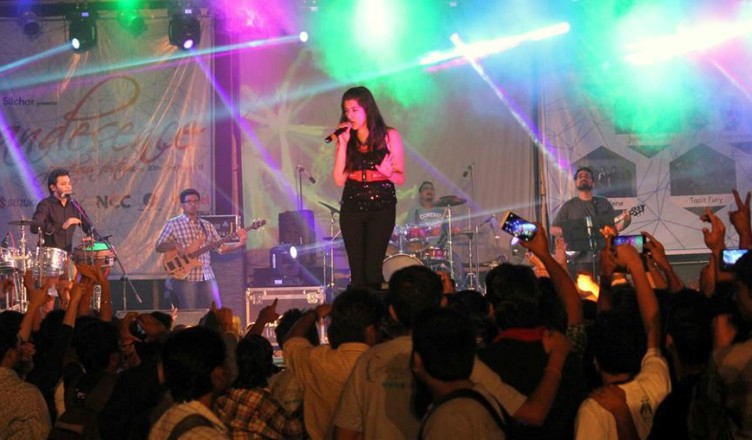 This year, the theme for the fest was ‘Fair’ and it justified its name; the ambience of the institute was totally fun and frolic. Several modules were chalked out catering to several fields. If Nataraj or Dance Module saw the Michael Jackson s of our institute grooving to peppy numbers, the Music Module or Indie Lake allowed the young songsters to fill the atmosphere with melodious tunes. While the Film-making Module allowed the directors and actors in students to come out, the MUN module created a miniature United Nations and provided a platform for the budding MUNners. It’s not over yet…the Fun Module had been the most exciting, comprising of several fun-filled activities like Prom Night, Blind Date, Treasure Hunt, Roadies, Zorbing, Crime Scene Investigation etc. took students on cloud 9 and made everyone go mad.

Another big event, Razzmataz exclusively for school children of Barak Valley provided them a platform to display their creativity and enjoy a fun-filled ride. However, the nights during the fest were more promising and lively.  On the 20th night, Glitterati, a fashion show was held which as expected drew a huge audience. Notable artists Nitin Gupta (popular comedian), Kumar Vishwas (AAP Leader and poet) and AVS- a magician graced the 21st night. The hilarious jokes, the satirical poems and the bewitching magic skills created an enrapturing atmosphere. On the 22nd night the attraction was Carpedium Night, where one and all thoroughly enjoyed the performance of Jonita Gandhi, a noted singer of India followed by a DJ Night by leading DJs of India, Progressive Brothers who had lit up the night sky of NIT Silchar.

On the final night i.e. on the 23rd; Thundermarch-the rock fest was held where bands from various parts of the country came here to compete with each other as well as popular bands Magdalene and Plague Throat of India accompanied by TacitFury, a noted band from Russia performed and made the crowd gambol to the metallic tunes. On the whole, Incandescence’15 truly made the students enjoy to the fullest and dive into the sea of ecstasy.