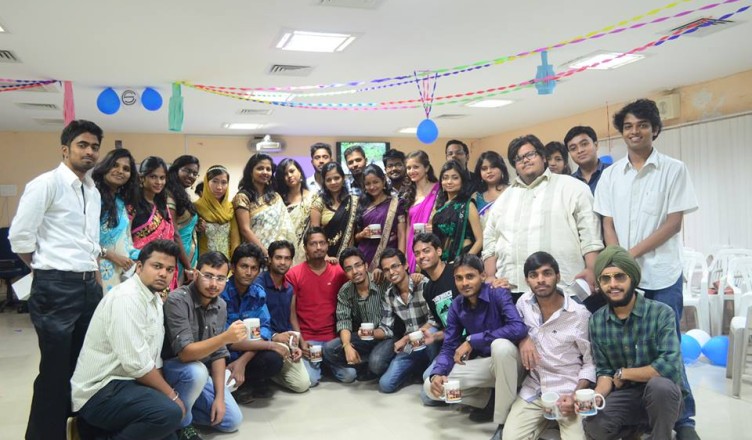 It’s been quite a journey, these four years.

I was a little intimidated on the thought of spending four years thousands of kilometres from my home. And the intimidation did wear off eventually as time progressed.

First semester of the college is now a faded memory in the confines of my mind. I remember the rains, first and foremost, the beautiful weather of this place and lush greenery around about. Goats and cows would roam around the place like it was their college first before it was ours. We were introduced to Engineering Drawing, a subject none of us wanted to be introduced to. Drawing cylinders and cuboids on a fairly large piece of paper and then being evaluated on it was just borderline insane. Little did we know, that borderline insanity was the running theme in the cards we were going to be dealt with. So much so, the mundane first semester was enough to levitate from me studies. Soon, like all the friends that I made then, studies slid in the table of priorities. There were things that almost everybody seemed to be doing back then. Making articulate (read expensive) toy robots for futile robotics competitions. Our robot couldn’t even roam around in the sand. The joke was ultimately on us when we returned from IIT Guwahati that time. Honestly speaking, to all first years who’re planning on making robots. Fuck it, they’re not worth your time.

The holidays came and went. College was more or less like a casual school by comparison till the end of the coveted first year. Cows were gone by now, yes. An honourable decision by the authorities. But digging had started. What started in the first months of 2012 is still very much pending. Typically what you would expect from a college project.

The college kid is perhaps the biggest stereotype you can possibly find in India. To some, we personalize incompetence and epitomize irresponsibility. At least back then, at the end of the first year, I could depose in front of a judge that I did not learn anything new academically. Some would say otherwise, but I don’t want to argue with them. They would continue to take nonsense seriously till kingdom come. Everyone in college wants to be cool. The hunt for cooldom eventually drives life in college. So when the second year started, time began to change.

We were transferred with our baggage to senior hostels during the rainy middle of 2012. It was a good time, to say the least. The food quality was up a few notches from the industrial sludge we were exposed to in Hostel 8, the freshman hostel. We were now in triple rooms and then there were roommates.

The first time we actually interacted with senior students was during this time. They had a unique way of introducing themselves to us. Some would use the R-word, but I would shy away from that. It was as friendly a “friendly interaction” could get. And boy, were there a few of those interactions. Someone would knock at our doors in the middle of the night and wake us up from the lullaby sleep. Kind words would be raining everywhere, glorifying mothers and sisters of every sleeping sophomore. Some would be asked to yell in ecstatic notion that they enjoyed sadomasochistic sodomy. And then, a toast was raised to the quality time we spent with our seniors. Humiliation was the first key to build a rapport with the uninitiated.

But the humiliation phase was shortlived and what began was a wonderful friendship between seniors and juniors. I remember, that I never purchased a textbook in my second year. Some senior would always have a textbook that I needed and they would come to our rescue. There was a bond that was cemented over time. Soon even the worst of us who resented the initiation process became advocates of it. The balance to the force had been brought. And parties began.

The placement season began for our seniors and parties began to flow like, well, wine. No one would shy from excess at those parties and we were introduced to a counter culture of good times. One part of the college would study and sulk with Teachers, the other part would party hard and party deep. In a way, we were all Baratheons from Game of Thrones, worshipping the royal stag. Some would demand a trial by combat and be deemed as royal challengers. Or there would be little kingfishers who would sit by the corner and watch the dancing from a distance. They would rather be number one in their own right rather than blend in with pride. Old monks would call these parties magic moments. And then everyone sooner or later discovers Pink Floyd. That requires a different form of initiation but everyone knows that.

As the celebrations concluded, a new festival started. College elections. I had not paid much attention to them internally when I was in first year but from second year you kind of begin to have a social responsiblity. Your own friends would be contesting for seats right and left and there would be opponents. Wow, unity and dancing together in those magic moments suddenly took a new turn. People began plotting and conniving in the dark corners, in the crossroads, in the mess and in their rooms. There was the first year vote bank that had to be taken advantage of, there was the final year vote bank, the girls hostel vote bank. Politics was everywhere. And not the kind diplomatic politics, the cruel Rajneeti kind of politics. Defamatory speeches began flowing and there was atleast one fisticuff when the results came.

Someone won and someone lost. And that was pretty much it. Elections separated and later parties brought them back together. Such was college life till second year. Exciting yes, but the keyword being here social. You get exposed to a lot of people in your second year and make a lot of new friends.

And then it’s gone. Seniors give their farewell parties and we part with the promise of keeping in touch. But how much does that happen? Life goes on for everyone.

People actually start studying. For internships and for jobs. This is a time in life where college gets a little serious for some. It’s finally the future at stake. My own third year, atleast parts of it, went in unexpected seriousness. Suddenly things began to seem important. Coding skills were to be improved, concepts had to be cleared. And Java. Everyone must know Java. That was a running thing.

Friendships had matured by then. Friend circles were like galaxies that had formed after the big bang in the first year. Hobbies like oratory and poetry took a back seat for sometime.  Friends who had started relationships in the first year were breaking up now. Immediate seniors were now sitting for placements and getting recruited. It was a different time. Pressure was building from home too. You were again at the center of your own expectations. By the time sixth semester had arrived, there was no time for loafing around. People studied the hardest I guess in their sixth semester exams as it was the last chance to beef up the CPI before  the placement seasons started.

Now our own feet were on the line. We were soldiers ready to be drafted.

Finally it dawned on us that final year was at the doorstep. The Training and Placement cell started posting the details of the first company that would arrive. We bought formals! Imagine the dope slinging, party animals trying to wear a tie on a nice summer morning. People at boys’ hostels would be shaving their faces in order to look presentable. Some would try to buy that cursed red book in a desperate attempt to improve their English. Gayle Laakman McDowell’s books began to outsell Chetan Bhagat and Amish Tripathi. Nobody gave a fuck about the secret of the nagas anymore. The first aptitude test. Was it scary as hell? Not really. But then hell has demons and we had HR personnel who were surprisingly  very cooperative people. They had travel miles and miles just to hire the talent that had been lurking in the likes of us. That was something. Reassuring. That many companies are coming all this way to pick a few of us for their own private collection of trophies. It was positively a good feeling. Failure, on the other hand, not so much so.

We failed almost on routine. The best of us stumbled on the last steps of the mountain. Sometimes it was the aptitude test, sometimes the group discussion and sometimes it would be the interviews. People would get rejected for not having a command over English. Some would fail at coding tests. Others would spend nights sleepless, mapping their future.

But every dog has it’s day, as the old saying goes. Sooner or later the moment of enlightenment came for everyone. Even the lamp’s own shadow is cast by it’s own light.

My own placement day was a pleasant surprise. After failing incredibly at many attempts, I finally made it to the final rounds. And then came the nod, the handshakes and the fist pumping. Congratulations poured in from all around Facebook. Any self doubt that had harboured in the yesteryear sailed away to oblivion. It was reassuring, reconstituting and reanimating.

Getting placed was like being kissed by rain after decades of drought. Sad faces soon lighted up and parties restarted. The college had enrolled us as despicable caterpillars straight out of eggs and now coccoons were bulging with life. Soon, butterflies started flying with their wings embroidered in different logos of corporate giants. #GotPlaced trended on Facebook like no other hashtag.

The overall sentiment was very encouraging. It was happiness for yourself and your friends. Reconcilations started taking place. All minor differences were forgotten and friendships were reforged in the kiln of euphoria.

We didn’t even realize all that was months ago now when our juniors started us for our own farewell meets. We were standing in the same shoes that our seniors were and their seniors before them. It was tradition. These were people you spent the better part of the last years with! How can these goodbyes be the final goodbyes. It doesn’t make sense!

Had time passed already? Is it already four years? How can that be? It’s only been…a few days.

College life has been a microcosm of life itself. You’re born and you age. You mature in the light of your chosen path. And then when your time comes, you descend into the afterlife.

These days were etched in 24 carat gold. They’re not going to come again. No sooner, we’ll be packing our bags and hugging each other goodbye. Sun will set here but dawn will break in another hemisphere.
It’s like they say in the movies. Don’t be sad because it’s over. Smile, because it happened.

It’s like they say in the movies. Don’t be sad because it’s over. Smile, because it happened.