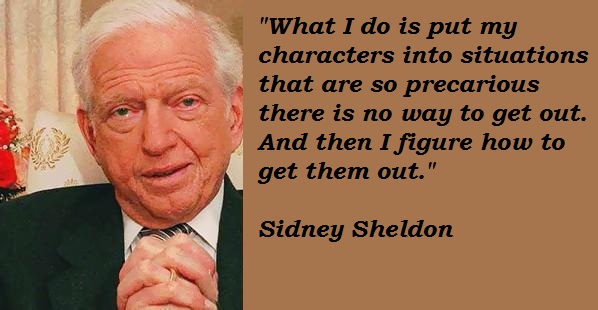 After reading a dozen novels of Sidney Sheldon, though a precise agreement can be made with the fact that the climax brings forth a predictable end but I still stick to the conclusion of every story being the best companion probably because of its utmost fortifying power of trading in pure emotions. Every story manages to suite your present mood. Characters’ eccentricity never makes them incomprehensive in lieu it serves as an element of connectivity with the readers. The magical characters and storyline can never be outlived as evidently proved by the year of his 1st published novel (The Naked Face

My introduction to Sidney Sheldon was through ‘Tell Me your Dreams

’, and I recall that I couldn’t manage to put it down even for a second. The book takes you to the soul of a diligent, intelligent, gorgeous woman Ashley Patterson in late twenties, settled in California, with a cushy job at ‘Global computer Graphics Corporation’, a fast growing young company at the place popularized as being the ‘birthplace of computer revolution’, nicknamed as ‘Silicon Valley’. Toni Prescott and Alette Peters are both co-workers of Ashley’s, however their similarities end there. Toni’s complementary nature to that of Ashley’ s is portrayed too carefully, never to leak any unnecessary hint to the very core. As this psychological thriller unfolds keeping you poised on the edge of your seat it lucidly explains a disorder inflicted by the atrocities of a dejected, devastated, abused childhood. More shocking was the person behind this act of unforgivable brutality and his compromise with it which gradually led to several murders.

’ is the best in my view. It introduces you to Tracy Whitney, a simple, happy working woman leading a normal life all of a sudden gets entangled in a mysterious death gradually leading to her getting framed into a fifteen-year sentence in an escape-proof penitentiary. With dazzling ingenuity she fights back to destroy the invincible crime lords who put her there. With her intelligence and beauty as her only weapons, she attains an extraordinary fleet in the profession she is forced to choose. With the endeavor to keep herself going she gets acquainted with the person she was destined to meet. Jeff Stevens, a truly remarkable character. Tracy and Jeff share a strange mutual interest of pulling each other off the track only to end up being with each other. It’s a story of how a woman is forced to leave her life behind when being the target of noxious recidivist, is also betrayed by the only person left in her life. Being alone, how she wears the identity of a person she never had any link with, just to survive and seek revenge for what came down on her. This is one of those few stories which make the readers happy at the end after letting you travel a journey through the life of a framed prisoner in a penitentiary surrounded by criminals, maniacs etc. As she puts it

‘I love living at the cutting edge of danger’.

’ stands out in this regards. Kate Blackwell(McGregor), the one in control of the entire storyline could go to any extent for achieving her desires. “The leaves of memory make a mournful rustle in the dark”. On her ninetieth birthday, still a proud, erect figure Kate is found to be lost in introspection about her family, “My family, …My immortality…. A murderer, a grotesque and a psychotic. The Blackwell skeletons.” The novel portrays four generations captured into one book, all of them exclusively striking. This story has it all, a determined dreamer leaving behind the security of the only life he had ever know with no regrets, shrewd people seeking opportunities to deceive others, a betrayed, devastated soul transforming with vows to dethrone the deceiver, strong, invincible people, their commitments, their endeavor for every revenge and avenge, wistfulness surrounding every relations be it the fulfillment of a promise made to a friend ages ago, or loving and caring earnestly for a person knowing that would never be returned, a sensitive, creative son losing his way under the burden of over-expectation imposed not deliberately by his mother, a headstrong business woman manipulating others to obtain outcomes that she sees as beneficial to her family and the family business, jealous twins, then the profound, unselfish love that knows no bound.

‘Windmills of the Gods

’, portraying a strong female protagonist like majority of the other Sheldon novels is centered in a political background. It clearly reveals the complicacies, distrust, aggression, and vengeance prevailing in every individual. The central character named Mary Ashley is portrayed as a very strong,  intellectually incredible possessing good deal of political knowledge along with coherent views of political strategies, implementations etc. She is shown to be very influential and unpredictably carrying out her duties with perfection keeping her friends and foes bewildered. The storyline goes unpredictable as usual. My personal favorite character Mike Slade was portrayed as the strangest of all. His entry in the story was makes to leave some disgusting feeling. Though going through so many Sidney Sheldon novel it could very well be predicted of him not being the bad guy even if the preceding evidences being against him. His way of talking in an unrevealing manner, conveying multiple meaning letting us into the roots of him being the secretly heroic one. The other remarkable character being of “Angel”, the assassin never seen by anyone alive is indeed a perfectionist by nature. The final revealing about him is the ultimate and makes entire flashback replay. The president Paul Ellison doesn’t have much dialogues or appearance in the script but it’s his decisions and actions that switches the entire operation. Thus The President remains the most influential figure triggering the decisions of every secret organizations, missions, individuals etc. The other significant characters were Mary’s husband Edward Ashley, her son and daughter Tim and Beth respectively. Edward, professionally a doctor is depicted as being very loving and caring as a perfect husband whose death becomes the u-turn of the storyline. The friendly Stanton Rogers, the best friend of Paul Ellison, also being the contender for the post of the president has much to play and finally gets revealed.

’, about three young female doctors at Embarcadero County Hospital in San Francisco, hopes, their dreams, their unexpected desires etc. The story, set against hospital and courtroom, chronicles their lives together and their struggle against those who are determined to see that they don’t succeed. Dr. Paige Taylor, swore it was euthanasia, but when Paige inherited a million dollars from a patient, the D.A. called it murder. Dr. Kat Hunter, vowed never to let another man too close again-until she accepted the challenge of a deadly bet. Dr. Honey Taft, found a way to turn everyone, every situation in her favour.

’, speaks of the secret underground city of Krasnoyarsk-26, one of thirteen closed cities engaged in nuclear production, ‘Rage of Angels’, tells the story of beautiful Jennifer Parker, a rising young New York attorney who becomes involved with two very different men, ‘Stars shine down’, story of Lara Cameron, a self-made billionaire who had dominated the world of real estate, ‘Bloodline’ also center around bold female protagonists unlike very few like ‘The Naked face’, ‘The Doomsday Conspiracy’, ‘Are you afraid of the dark?’ etc.

As concluding words, Sidney Sheldon novels introduce you to a hub of interesting and interrelated characters, every facet of human passion and compassion. Closely in sync with that every storyline deals with an issue, be it politics, business, science, law etc. Thus “Books let us into their souls and lay open to us the secrets of our own.”- William Hazlitt. “These are not books, lumps of lifeless paper, but minds alive on the shelves.  From each of them goes out its own voice… and just as the touch of a button on our set will fill the room with music, so by taking down one of these volumes and opening it, one can call into range the voice of a man far distant in time and space, and hear him speaking to us, mind to mind, heart to heart.”-Gilbert Highet.