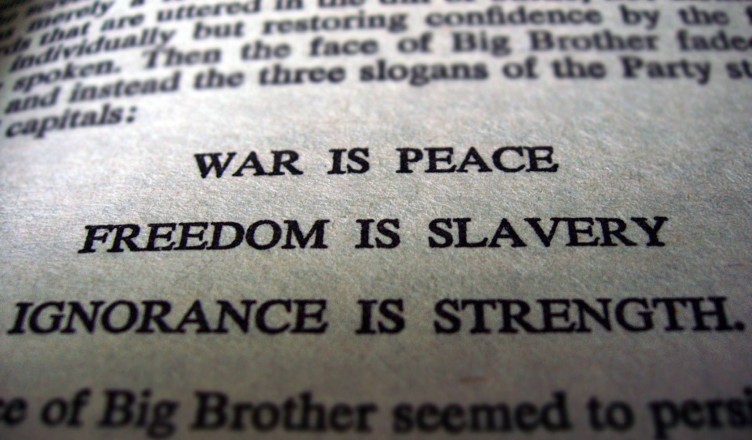 by George Orwell. My friend had been telling me a lot about how much he wants to read Orwell so I decided to gift him book as a birthday gift. The moment the book arrived I just couldn’t help but read it. The novel is the perfect combination of a thriller-adventure narrative and a manifesto for a future world. It is almost like a social-science fiction and that gives you the perfect dose of social theory with just the right amount of literary narrative and fiction to satisfy the taste for classic literature. Orwell surely knew how to raise the storm without being in the middle of it. Although a very ominous tone is followed throughout the book, it keeps a constant pace, very suggestive of the life inside the narrative.

The story follows the life of one man and his rendezvous in a dystopian world. The story opens with Winston Smith and his life in Airstrip One, a province built on the ruins of England. A constant war is being waged between Eurasia and Oceania, the erstwhile continents of the nether world and the present society is in constant state of turmoil. Life in Airpstrip One is not easy, with the strict regulation of the English Socialism- the political system controlled by the inner party elite and under the surveillance of Big Brother, the quasi-divine party leader. The narrative of Nineteen Eighty-Four is epitomized in the tyranny of language. The official language of the society is Newspeak, the language created by the party (IngSoc in Newspeak) which recognises emotions and words documented and deemed fit by the party. The party persecutes those who engage in individualism as ‘thought criminals’ and seeks to root them out from the population. Winston’s life is torn with his inner battle to choose between love for Big Brother and loyalty to the Party and his individuality and original thought. Things get more complicated when he encounters Julia, a young, vibrant woman and falls in love with her. He is exposed to new emotions and Julia’s rebellious nature leads Winston to willingly refute the ideals of the Party.  Winston is equally influenced by Immanuel Goldstein, the fabled former leader of the Party who is widely seen as the enemy of the state. Winston periodically escapes with Julia and takes refuge in their secret room above an old thrift shop, living life on their own terms without the restrictions of the party. The narrative ends with a looming sense of anxiety and forced contentment leaving many loose ends and unanswered questions.

The beauty of Orwell’s classic resides in his multi-faceted discourse that he creates between the post-war totalitarian society and a suitable democratic regime. He creates an illusion of freedom in a space that is highly constricted by strict rules and conventions and as the reader finally reaches the satisfaction of seeing the protagonists wield free-will, the narrative takes a cruel turn and all hell breaks loose. But you can’t help but wish for a miracle and at the same time gnaw at your fingernails and dread for the worst. Orwell creates a fictional universe that seems to be superimposed on a past that is very real and a future that hangs on a very delicate balance. George Orwell’s Nineteen Eighty Four sure made me doubt the legitimacy of prevailing systems and for a split second I really thought his work was more of a prediction than a fictional tale. I guess, you can’t really find narratives that are so accurate and makes it more so legitimate to call Nineteen Eighty-four a classic like no other. No wonder this piece of literature has a cult status of its own. I think everyone should make it a point to engage once in the world in Nineteen Eighty Four.