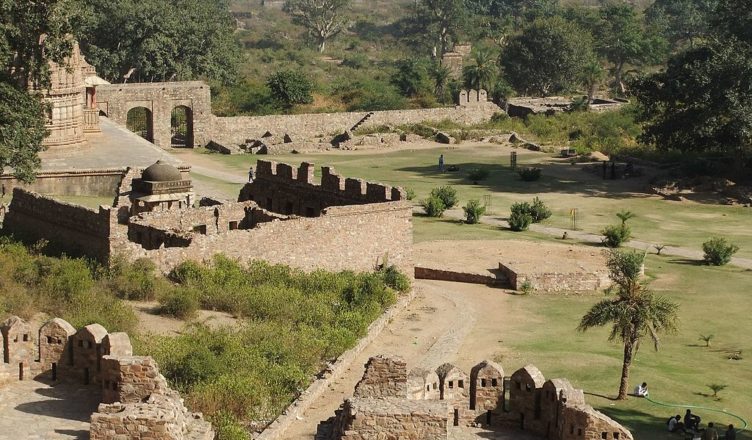 The 17th century Bhangarh Fort was built by Bhagwant Das for his younger son Madho Singh in Rajasthan. Located on the border of Sariska Tiger Reserve in the Aravali Range of hills in Alwar district, the fort is situated at the foot of the hills on sloping terrain. The fort covers a large area of land at the foot of the mountain. It possesses various temples, palaces and multiple gates and is beautiful in it’s own.

The beautiful fort is a counterpart of the medieval city of Shahjanabad. It has four massive gates in every direction – the Lahori gate, the Ajmeri gate, the Phulbari gate and the Delhi gate. The environment inside the fort is serene and there exists a miniature waterfall along with a few temples, palaces and havelis. But in spite of its picturesque scenery, it is famous as the ‘most haunted place’ in India. It is believed that the innumerable ghostly experience happening within the fort premises has caused the people living in the villages nearby to flee away due to fear.

As per the Archeological Survey of India (A. S. I.), entry is restricted in the precincts of the fort at night. It is said that Bhangarh Fort is ranked as the most haunted place in India due to the association of these legends with it –

The curse of Baba Balu Nath

One of the most popular stories related with the Bhangarh Fort is that of Baba Balu Nath. Baba Balu Nath was an ascetic who used to meditate there long before Madho Singh decided to build a fort there. Emperor Madho Singh is said to build the fort with due permission of Baba, who agreed on the construction of the fort on one condition – that the shadow of the fort must never fall on his home. Baba also said that in case this condition was not fulfilled, the city would crumble into ruins. This condition was followed by all except Ajab Singh, one of the ambitious successors of Madho Singh, who added certain columns to the fort. As the palace was built to such great heights, it shadowed the dwelling of Baba. It caused the draining out of the town and destroyed the fort instantaneously. Due to Baba’s curse, Bhangarh was transformed to a cursed city and no structures ever managed to survive in it. However, one can find the tomb of Baba Balu Nath among the ruins.

The curse of the tantrik

Another story behind the Bhangarh Fort being haunted is related with Princess Ratnavati of Bhangarh. According to many, she was responsible for the destruction of the city of Bhangarh.

Princess Ratnavati, daughter of Chatr Singh was known as the ‘Jewel of Rajasthan’. She was universally liked by all and her incredible beauty and delightful nature were the reasons she was getting a marriage proposal from suitors of several states once she turned eighteen. One such admirer of her was a tantrik or a sorcerer named Singhia, who was well versed in black magic. Singhia was deeply in love with the princess but was well aware of the fact that he did not stand a chance of getting married to her. His passion to get the princess led him to allure her with his magical powers. He casted a spell on the perfume that the princess’s maid was buying for her. This would cause the princess to surrender herself to him no sooner did she touch the perfume. However, Princess Ratnavati came to know the trick and threw the perfume on the ground. It morphed into a rock, rolled towards the magician and crushed him.

Singhia cursed the Princess, her family and the entire village of Bhangarh before dying, saying that Bhangarh will be destroyed soon and no one will be able to dwell even in its precincts. It is said that due to his curse, no one born again in the village and fort. A battle was fought between Bhangarh and Ajabgarh the very next year. Princess Ratnavati and most of the army died in this battle. The fort is said to be inhabited by ghosts forever. Villagers also say that if someone tries to build a roof there, it collapses itself mysteriously. However, people still hope that Princess Ratnavati will return back to her fort in a different form to put an end to this curse. Incidents at the Bhangarh Fort

Bhangarh Fort is a mysterious world in its own which leaves everyone amazed and confused. The Archeological Survey of India has restricted entry inside the fort after sunset. Many incidents have been heard about people entering the fort at night, though it is difficult to say whether such incidents are real or not. It totally depends on a person whether he would believe it or not!

It is believed that the person who enters the fort after sunset never comes back alive. The fort is said to be captured by the spirits of Princess Ratnavati, the sorcerer Singhia and every person who entered the fort after sunset. People feel like their steps are being watched inside the fort and some even say that the air around carries a different sense of dizziness with it. Screams of ladies and voices of bangles can be heard from different rooms. Loud noises of crying, screaming, and shouting also contribute to the haunted stories of Bhangarh. Where some people say that the young boys who entered the fort after sunset never came back alive, we’ve also heard stories of people getting severely injured while visiting the fort.

The various haunted stories associated with the Bhangarh Fort attracts a huge amount of attention. It has been ranked as one of the most common tourist spots due to it’s rich history. People who love ghostly stories come here in order to experience the cheap thrills and test their adrenaline rush.

How to reach Bhangarh?

Bhangarh Fort is situated between Alwar and Jaipur, quite close to Delhi as well. The good connectivity of Bhangarh with these cities and availability of buses and taxis in abundance here makes a trip to Bhangarh easy from the above-mentioned cities.

What is the best time to visit Bhangarh?

The opening hours of the Bhangarh Fort is 6:00 am to 6:00 pm. As the entry is restricted inside the fort after sunset and before sunrise, the best time to visit the fort is between 7:00 am and 2:00 pm.

Things to do in Bhangarh

Bhangarh Fort is a must visit tourist destination for people who love supernatural powers and ghostly experiences. One can explore the ruins of the forts, temples and old abandoned marketplaces in Bhangarh. Listening to the haunted stories of Bhangarh by the local people there also acts as a cherry on the cake.

Bhangarh Fort has always been an attention seeker, not only because of it’s panoramic activities but also due to its rich architectural importance. Even today, people who love adventures and mysteries tend to visit the Fort after sunset. However, it is difficult to say whether the stories of visiting the fort at night are real or myths!