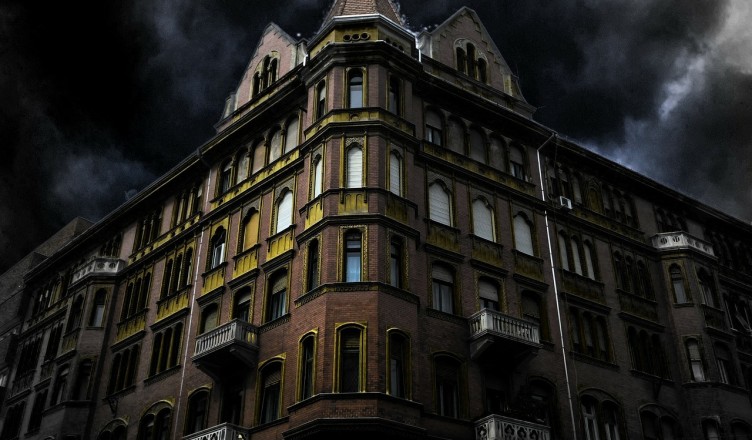 (You may want to put up Hotel California while reading this to enhance your reading experience. Based on the true fact that the Academic Block in our college corridors are creepier after dusk, when deserted..)

I was not one of them. But yet I was screaming.
The long corridor was devoid from any form of illumination and my cell phone was dying out. And then it flickered, and like a defeated matchstick, dissipated the last of its light as darkness covered it in my very own hands.I was in the academic block and it was past two in the morning.I can swear that there were voices and people in that building.The academic block has been a source of inspiration of self-murderers throughout the history of our college, a senior had confided to me in secrecy. Though, everyone knew the fact, no one uttered about it. They could not see beyond the darkness that lurks in those insidious corridors. And so couldn’t I.

I heard footsteps and I ran in the direction of the space. The wind was whispering in an altogether snaky hiss, as if calling me to the inhabitants of the night wing of the college. The academic block was haunted. I was damn sure. It all started when I volunteered for help in the preparations of the alumni meet. I was in hospitality, and was escorting fellow alumni about the college. I had to know each section of the academic block, as offices have migrated here and there. No alumnus should return disappointed, the organizing seniors had instructed to each volunteer.

One alumnus was telling me a story, I was not very much able to digest, when I was walking with him in front of the Central Library. He told me that long time back, before this college was founded and tea farms stood where the college stands now. There were villagers, who would often cremate bodies in this section where the library stands now and then take the ashes to the Barak. The region being remote often lacked a proper ritual, so some departed souls would not find a complete connection to the after world, and hence get stuck here, doomed to wander till eternity.

Later on, when I left him, I got a phone call from another alumnus who claimed to have stuck near the Electronics and Telecommunications Department and was not able to find his way to the exit. I ran towards there to find no one.
When I returned to the exit, the doors were closed. Night had fallen.

‘Ajay. . .’ I heard the wind taking my name. The sound was cold, yet poisonous, like fangs of a cobra who is hungry from cold. A cold blooded animal was hailing my name. Maybe it was all in my mind. Maybe it was all in my head. Maybe.
I had giggled on the nonsensical prospects of having ghosts in our galleries. Now the giggle has turned to me, with mouths unknown. I was running haywire against the direction of the creepy whistling. Sweat was pouring down my neck, and seeping into my shirt’s collar, walking down my sleeves till it evaporated into the air near my wrist, leaving a stunning chill. I was growing envious of all safe people in their beds.

My steps had become slower. My pace was retarded. ‘Help me!’ I cried, ‘Guards! Anyone!’
No one listened. ‘I can help you.’ A sweet feminine voice addressed me. I looked about me in all random directions. There was no one. ‘I can help you.’ Someone said again in that same voice. ‘WHO IS IT?’ I yelled. My own voice echoed through the network of corridors and indiscernible passages. There was a sudden tickle on my foot. I felt as though a snake had crawled over it.

‘Come hither!’ The woman giggled. I was reduced to a shaking structure of flesh and bones, skin whitening more every second. The corridor’s cool was raising my temperature. I ran towards the edge of the corridor, from where the voice was coming. There were footsteps, loud and heavy. I ran towards that sound, and then I saw her. She was serene, and white. A cloudy mist hovered around her, with a dirty white glow. She was smiling, her jet black hair falling over her shoulders. Her teeth were red in disdain, as of a lioness after her prey. She was tied to the ceiling with a rope, her body rotating about the torsion. I looked at her with my pitied eyes, unable to cry. And she was smiling, telling me to stay.

I resisted. I said no. And then her eyes froze in a dead cold. And she died; maybe again. I was tired that I wanted to retire. I wanted to faint. I wanted to freeze. I ran helter-skelter and fell humpty dumpty. Only to find apparitions and ghosts in every room. Some were crying and some relenting; others trying to breathe in a world resenting.
But the night wouldn’t go. The time wouldn’t stop. The wait would remain endless to me, it seemed. There is no way that I will be able to get out of this building. I sat down on the cold floor, the only thing apart from walls identifiable in the darkness till I saw a little small red dot.

It was a live cigarette. There must be a smoker too. I ran towards the dot, only to discover that the guard had opened the gate of the building. The horizon was clipping up. It was dawn. And dawn had broken up in me. I was feeling lighter and extinct. But I know I will come back again next Alumni meet, where we, the dead alumni of this college, who had ended our lives with our own hands to leave the college will meet.

My moment will come again as I will kill myself with a small overdose of sleeping pills following my year back in the fall semester of 1986, wishing to go away with the passing Halley’s comet. But I could not leave more than my body, as Richa, my love, also hung herself in the classrooms a day after my demise. The guilt of taking her life will always remain with me in this college. The guard was opening the door wider. The hanging woman laughed once again, softly, but for my ears only.
I tried to get out.
But I could not.